Memories of Rhosneigr in the early 1900s

In the early years of 1900 which seemed so happy and carefree, our excitement knew no bounds when we boarded the train in Liverpool for our holiday in Rhosneigr. We had our picnic basket in the carriage with us as there were no corridor carriages in those days. Our trunk and trunk-like hamper filled with groceries went into the luggage van as near our carriage as possible.

Our first sight of the sea was at Colwyn Bay, and the wonderful smell of the fresh sea breezes made us impatient to reach Rhosneigr. At Bangor station, where the train divided, our Granny stood by the luggage van to see that our trunks were not taken out by a porter. The station for Rhosneigr was Ty Croes where all the trains were met by various horse-drawn wagonettes and carriages which were all open to the weather. Many a time we children had to crouch under a rug or mackintosh to avoid getting very wet. There were such pretty, winding, narrow lanes with grassy banks on either side, covered with wild flowers and topped with golden gorse. Here were many wild flowers: harebells, toadflax, scabions and penny royal. Honeysuckle and wild pink roses scrambled over stunted hawthorn bushes. We passed two windmills in working order, often with their sails turning round. In the marshy parts of the fields yellow iris, meadowsweet and purple orchids grew.

We came to Llanfaelog and passed the Parish Church on our right and turned sharp left round a narrow, blind corner. We passed a little general stores with Shop-y-Llan over the door which was in two halves, the upper left open to give more light. Then passed the grey stone school and over the railway bridge towards Maelog Lake. On the common was a 9-hole golf course where the English and County Golf Champion, Miss Gladys Ravenscroft, played. The Club House was part of the Maelog Hotel. This hotel had a precarious start as the local people objected to it being built on common land.

Droves of wild ponies used to wander, usually galloping, between this common and the one where RAF Valley now have their runways. Rhosneigr station was only built just before World War I and closed again for the duration of the war so Ty Croes station was used again for passengers for Rhosneigr. Mr Barclay was Station Master. The horse drawn wagonettes were gradually replaced by black open Ford cars.

We used to go for walks around the lake gathering wild flowers and picking blackberries in season. There were bluebells at the top end of the lake around an outcrop of grey rocks and gorse bushes, and once we saw a snake among them. Flowers grew among the rushes at the edge of the lake – blue-eyed forget-me-nots, sweet smelling mint, yellow flowered loosestrife and sunflowers. In the lake yellow and white water-lilies grew. The fields around the lake were kept for hay or grazing black cattle. After the hay was cut we had picnics among the haycocks.

The village had very few cottages and shops and there were wide open spaces. The main street was hardcore and sand blew in gusts and was very unpleasant in a gale. Where the post office now stands was a baker’s shop belonging to Mr & Mrs Britton. Where the Midland Bank was (now Fat Face) there was a general hardware store known as Teddy Top Shop (the owner’s name being Edwards). The row of red brick terraced houses below Fat Face were built to house the Coast Guards and their families – hence the name Marine Terrace.

Coming into the village on the A4080, just before the clock was an ironmonger who sold fishing tackle and shrimping nets. He also had a yard for coal. The place was called Morfa Hill but known locally as Tinny Morfa. It was owned y a Mr Owen. The coal came by sailing boat into the Boat Pool and was collected at low tide by pony carts. Opposite Marine Terrace were two butchers shops owned by Mr Rodick and Mr Lloyd. Their sons used to try and catch the wild ponies and ride them bareback. The other three shops further down the street were the Post Office-cum-grocer run by Mr & Mrs Williams. The other grocer was Mona House, the corner house at the top of the road going down to the Life Boat House. It was run by Mr & Mrs William Hughes. Mr Hughes drove a taxi and his son Bill took it over. Next door to Mona House was a little white cottage called Mona Cottage and there Mr Hughie Owen was born. His grandfather William Owen, who lived next door, was coxswain of the lifeboat and Hughie’s father was first oar. The lifeboat came to Rhosneigr in 1872 but as the rocks and reefs made it a hazard to get out – sometimes it was impossible – Rhosneigr’s lifeboat left in June 1924. Rhoscolyn was the nearest lifeboat after 1924.

Each year there was a carnival on Maelog Lake with gaily decorated rowing boats and canoes made and hired by Mr Hughes and his son Arthur. They lived where Lakeside Service Station is now. A square wooden boat, which was used for carrying the quarried stone across the lake, was cleaned and decorated with Japanese lanterns. A piano was put on board and played by Mrs Stubbs of Liverpool who rented Carreg Falen for years and was well known by everyone in the village. People in fancy dress took part and danced about and sang. One year Inie and Jack Palethorpe came as prehistoric men draped in fur skins and brandishing large animal bones. Teago’s Fair used to come each August which was very popular with its merry-go-round, swings and coconut shies.

The post came from Ty Croes by pony and trap. The postman walked back to Ty Croes, leaving Rhosneigr at 4pm blowing a whistle so that people could give him their letters to post as he had 1d stamps for sale. The milk came from local farms also in a pony and trap. Eggs were 6d (2.5p) a dozen and were sold with the milk and butter. Chickens at 5/- (25p) each, ducks at 6/- (30p) each were also sold or ordered. We had our milk, eggs and chickens from Johnny Parlwr (Jones). The eggs often tasted of the sea as the hens had free range on the shore below Parlwr Cottage.

There was no mains water (it eventually came from the Maelog Lake just before World War 2) or electricity which came at almost the same time. Lamps and candles were used. Most people drank rain water which made lovely tea. There were one or two wells about the village. People had stone filters with little taps for filtering rain and well water. Each cottage had a little shed or outhouse known as the Ty Bach – generally at the bottom of the garden with a large stone on the roof to stop it blowing away in a gale. Sometimes the accommodation inside was for two or three (a child’s a mother’s and a father’s size!) Once a week at night a metal, horse-drawn cart came round to empty the buckets.

Doctor Phoecian Banff was the doctor. His father was the Greek Consul in Liverpool. He lived in Iris Cottage, now Bryn Comas. He had several spaniels and a tame jackdaw which he taught to speak.

Rhosneigr was popular for artists. George Cockram RA had a studio overlooking Cwmyran Bay, the view he so often enjoyed painting – with golden gorse, the sea and Holyhead Mountain in the distance. These were happy days with picnics to Rhoscolyn or Aberffraw, some going by sea and others by wagonettes with the picnic baskets. We all loved our holidays in Rhosneigr.

In the early dawn of a June day in 1942 a sea-mine exploded in the boat pool shattering the windows of Borth Bach (the bungalow next to Craig-y-don) where I was staying awaiting the birth of my first born.  A cascade of debris fell on the roof giving us all a nasty shock. Men from bomb disposal arrived later that morning as there was another sea-mine bobbing about by hotpot rocks. All the houses were evacuated. We stood on a hillock on the land for an hour or two while brave men dismantled the bomb and we could return to our homes. For many years the shell of the mine was used by my uncle, Leslie Webb, at Red House for his turkey hen to hatch her eggs.

Towards the end of the war the local soldiers were provided with DWKS, a sort of water-born tank. When they first appeared in Rhosneigr they caused great interest as they gave children rides in them – picking them up in the village, bringing them down the track passed Borth Bach, out to sea and back into the front bay and on to dry land.  My brother David rode in one but Andrew was too young, in spite of tears and tantrums!

One day my friend and I were pushing our children in prams along the lane to the main road when we saw a plane from Valley explode over the far side of the lake. It turned into a ball of fire and plunged to earth, out of sight, towards Llanfaelog. We ran as fast as we could bumping the children in their prams, thinking we could help. But the plane crashed into a field beside Ty Croes station burning the pilot to a cinder. A train was standing in the station but no-one on board was hurt.

John Peel, whose real name was Ravenscroft, also spent his childhood holidays in Rhosneigr. His grandfather owned Lakeside bungalow which once belonged to my maternal grandfather, an Anglesey man born and bred. John Peel made a TV programme called, I think, Snapshots. It was about his childhood memories of holidays in Rhosneigr when his family stayed at Red House and other rented houses. He told amusing stories of not recognising his father returning from the war and about his own army training at Ty Croes camp where he did his National Service, the friends he made and the fun times they had going to Liverpool for the pop concerts of the day. 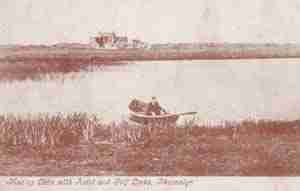 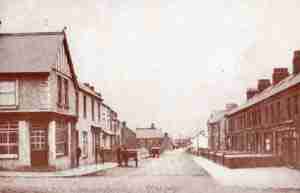 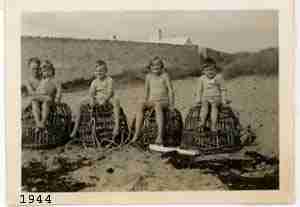 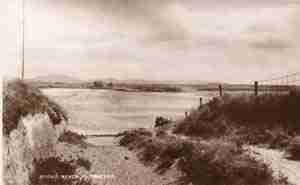